Problem Solving In The Shop

A while back I hit a high hurdle in the shop and it took me a while to think my way over it. I'm working on creating this chair depicted in the 13th century manuscript known as The Maciejowski Bible. 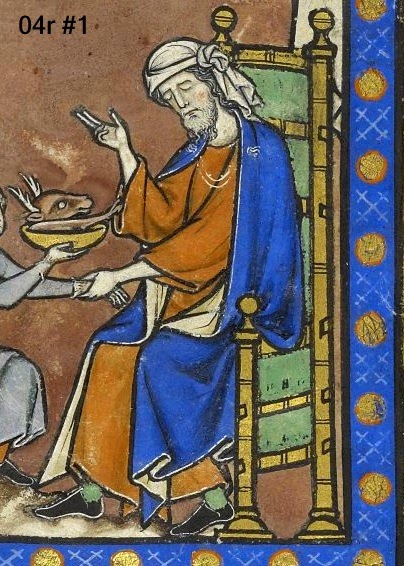 If you look at the chair you see round, turned columns joined to rails with mortises, not terribly difficult to accomplish with hand tools, but the kicker in the joinery design is the green panels fit between the rails. This requires some variety of groove or dado along the length of the columns to hold and hide the edge of the panel.

There were two ways to think about it. 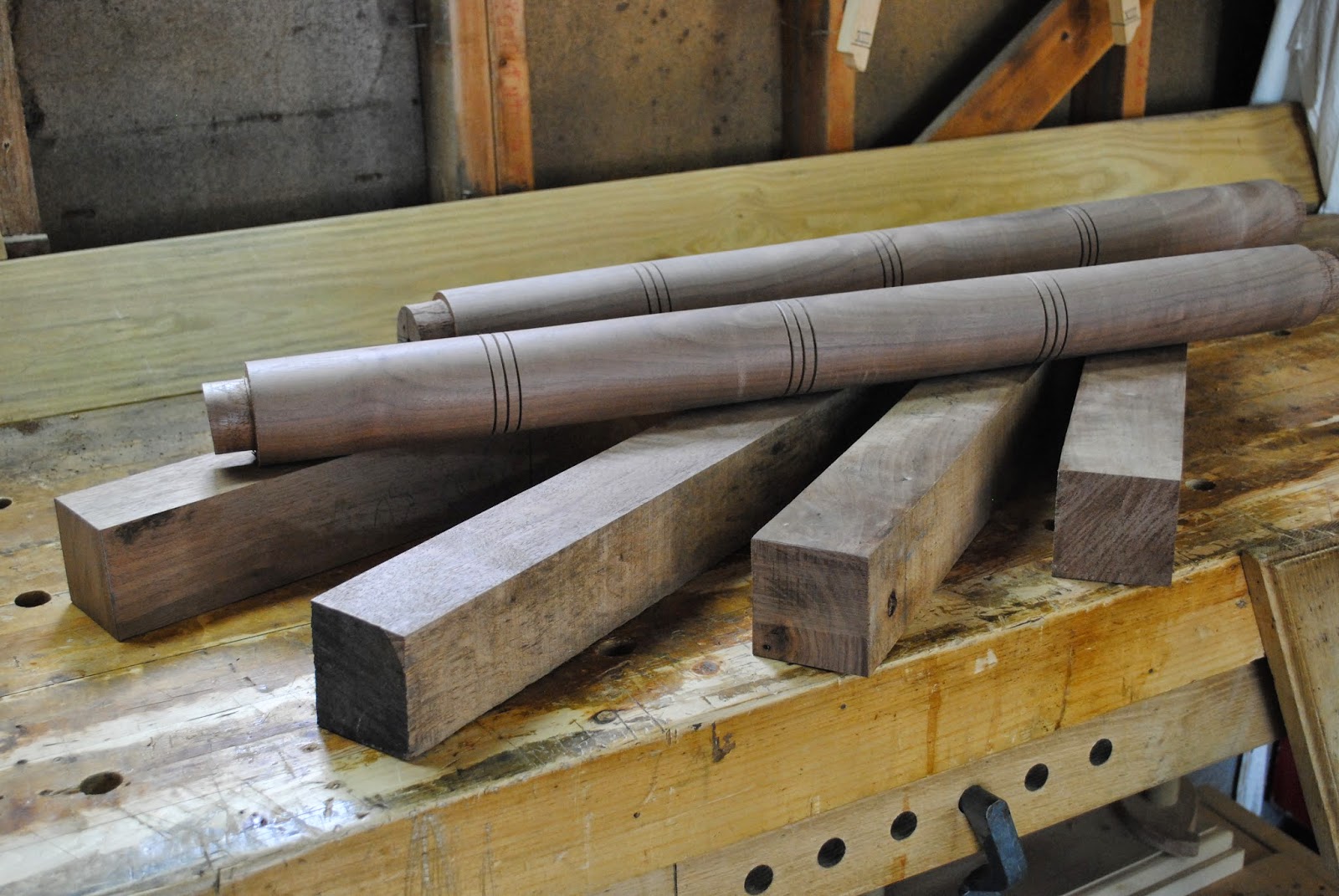 First I could plow the groove in any standard way while the stock was still square. Then hope against hope that while I turned the legs on the lathe I wouldn't catch and tear out the groove too bad or worse, catch it very bad and wrench the whole piece off the lathe and send it careening across the shop.

On top of those dangerous prospects would be the gymnastics of getting the groove at proper center and depth before turning. Maybe with a CNC router or lathe, but not in my shop. The idea was out pretty quick. 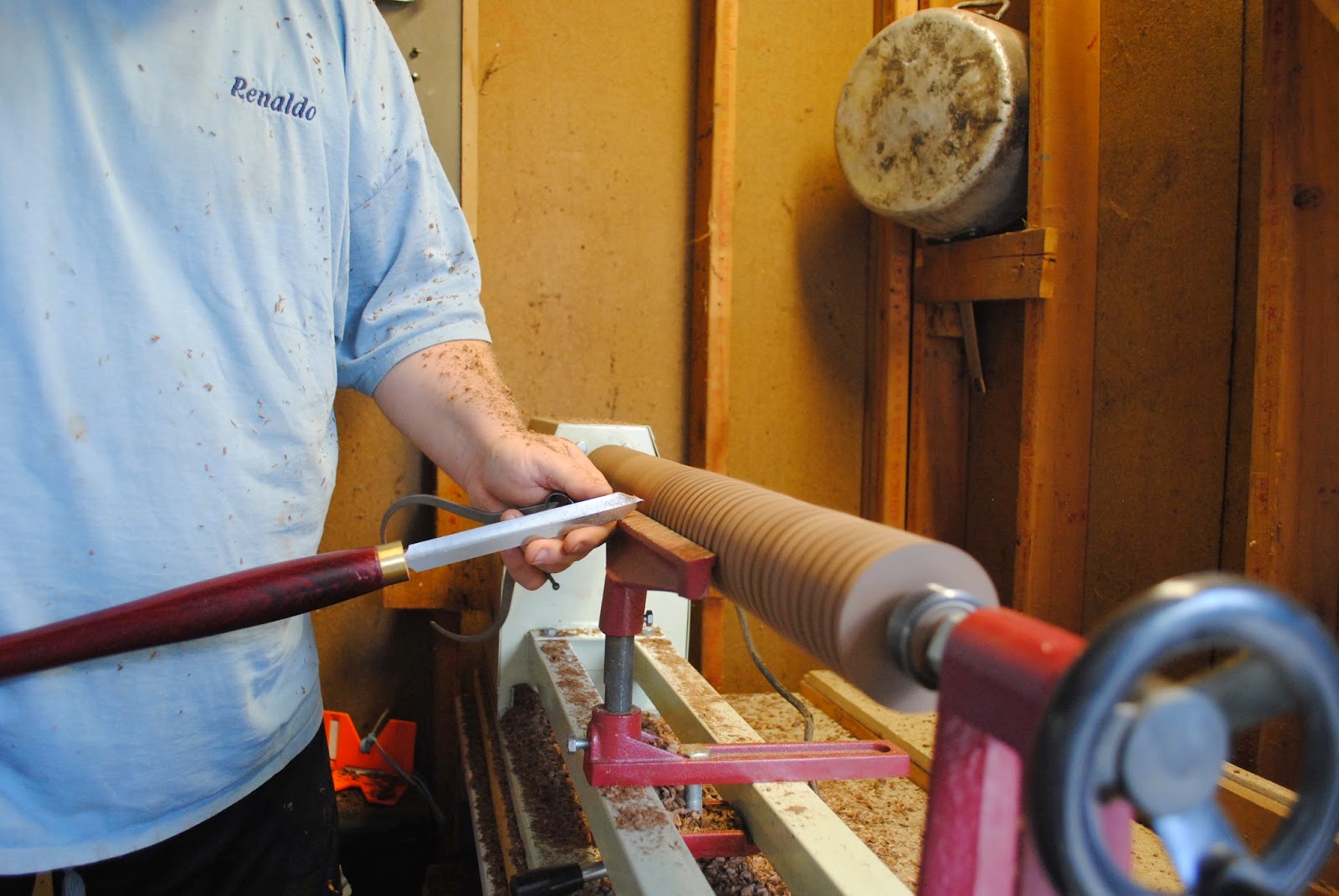 So I turned the legs and chewed on the problem the whole while. At first I thought I would build a jig shaped like a long box. From either end I would clamp the column and from the top I would make a lid for the box that had a long slot cut in the center.

I would then run a router with a pattern template up and down through the slot and make my groove. I even went out and purchased the lumber, clamps, and a router base plate and bushing set from Milescraft to carry out the job. As I started to build the jig, my gut started to talk to me. I can't say exactly just what made me stop the process and switch gears. There were too many x-factors and measurements and it just seemed too likely an opportunity for me to screw the pooch.

Did I mention I wanted these grooves to stop at a point and not just blindly run the entire length.

Making the legs out of walnut, I didn't have any spare stock to make another if thing went wrong. I had to be smarter than the problem, and that's sometimes tough for me. 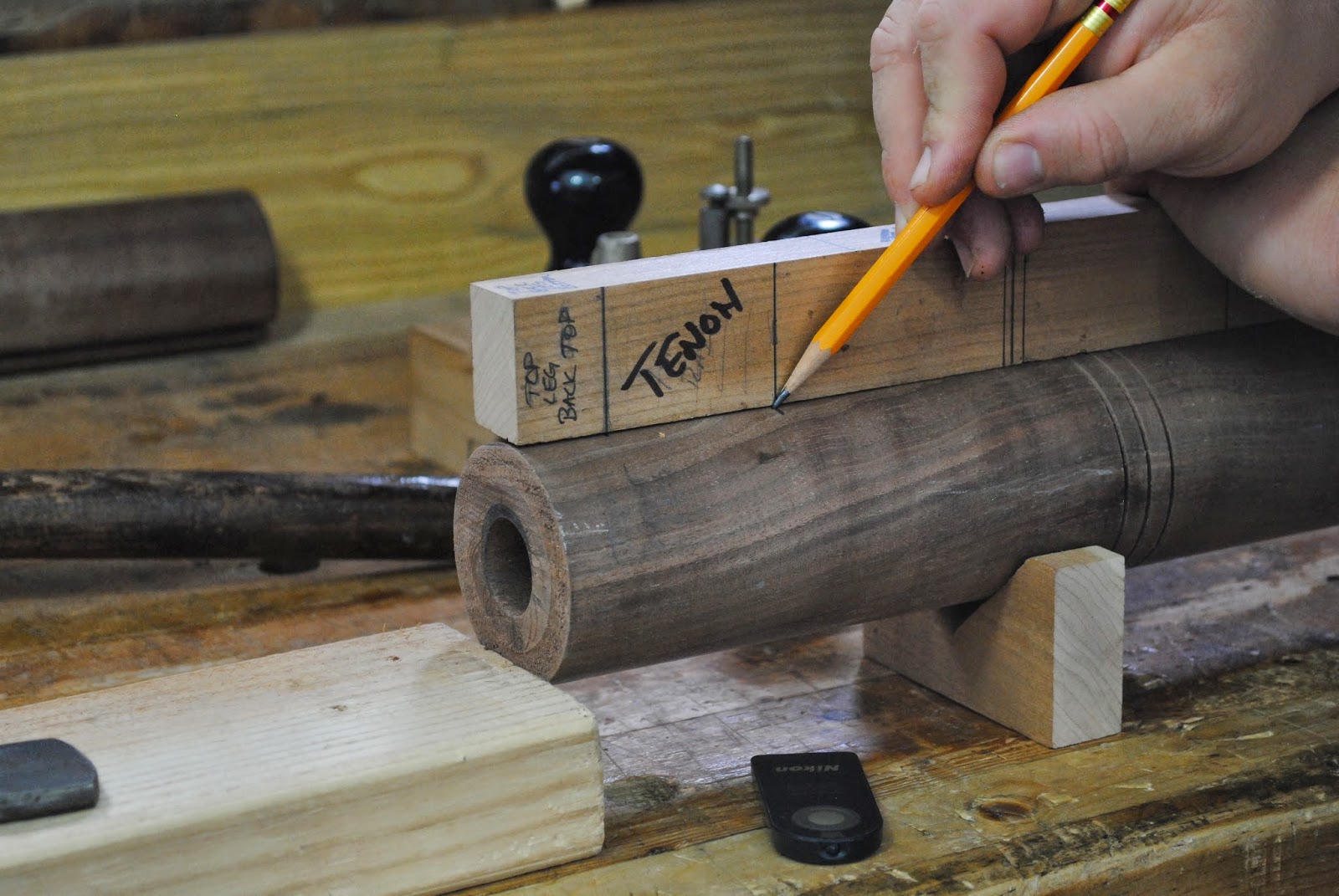 I waited and I thought.

I worked on other things and I thought.

I searched the internet, paged through books, wrote unfinished emails asking for advice.

My joiners saddles were my first inspiration. 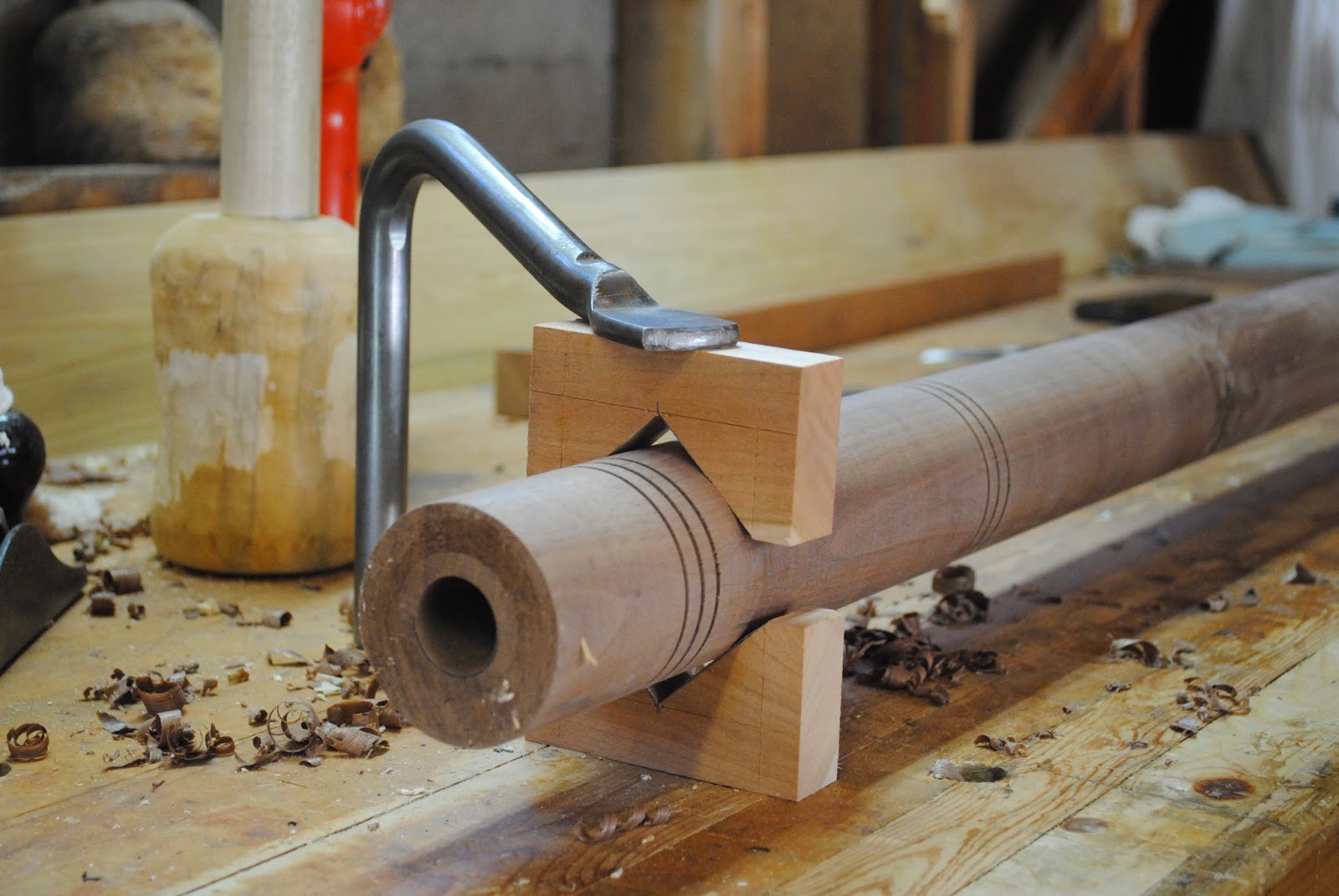 I wanted to use my plow plane to make the grooves, and if I could figure out how to attach a joiners saddle shaped addition to the fence, I'd be golden. 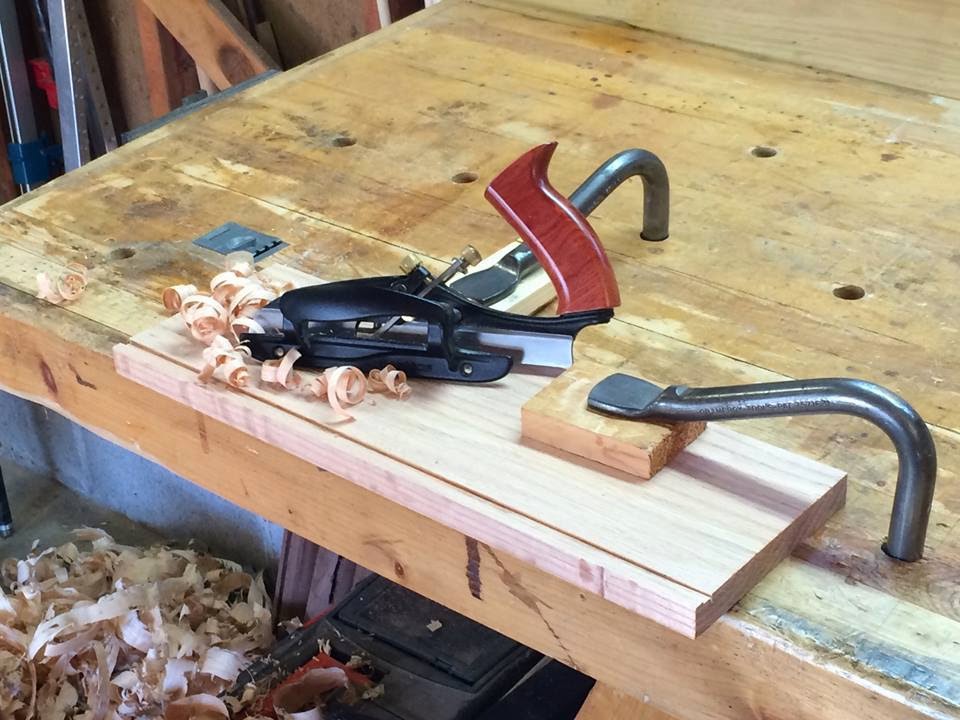 But the physics of the plane defeated me. As you cut deeper with a plow plane, the fence moves deeper too. There was no way to do it and keep the fence centered on the round column. (Sitting here this morning I have thought of another way to do this with the plow that probably would work. I'll leave that for another day)

I thought about what else I had that made grooves, chisels, and a router plane.

Once I landed on the combination of router plane and joiners saddle I knew I'd picked the lock. 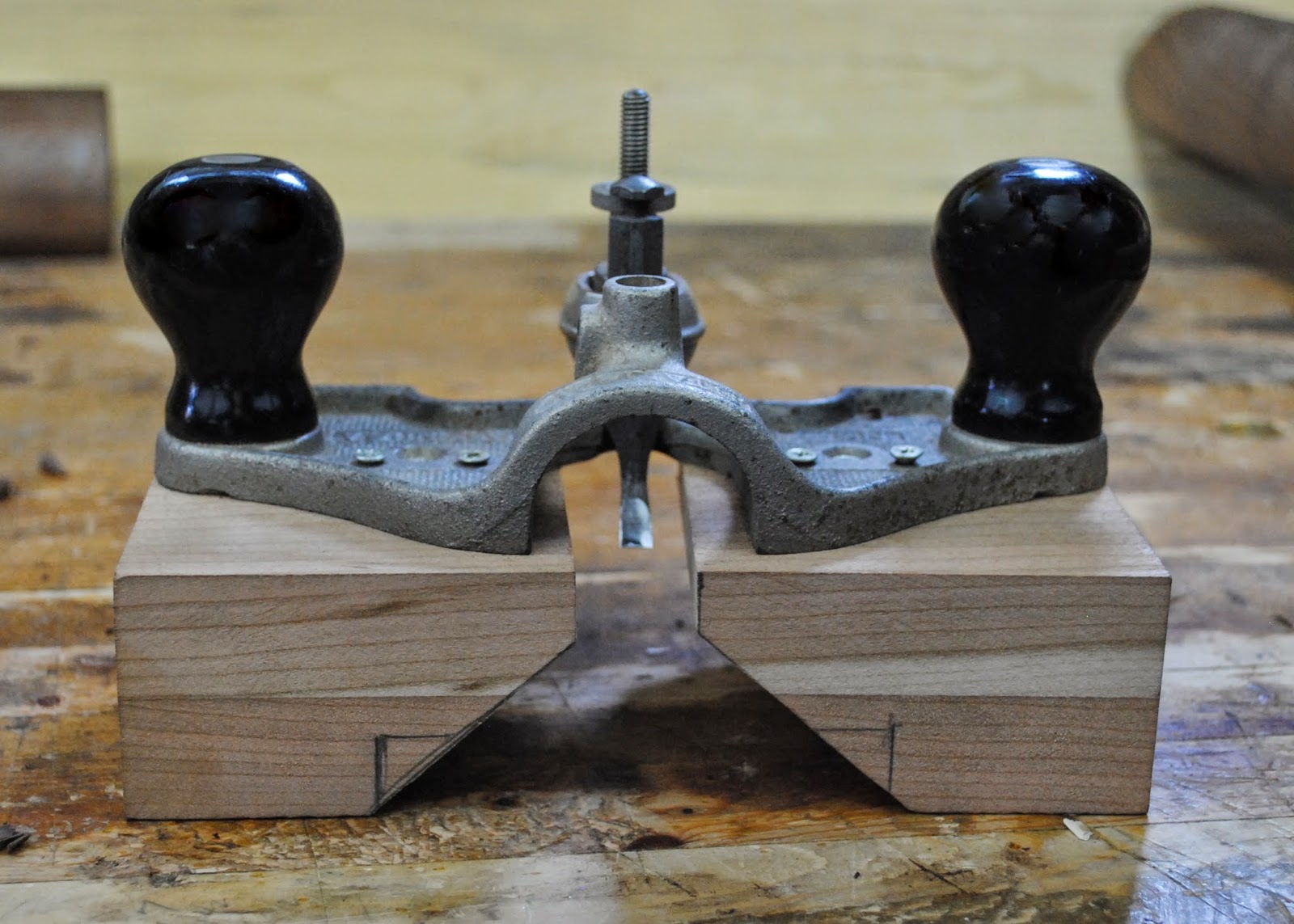 All that was left was to figure out the specifics and see if it worked. 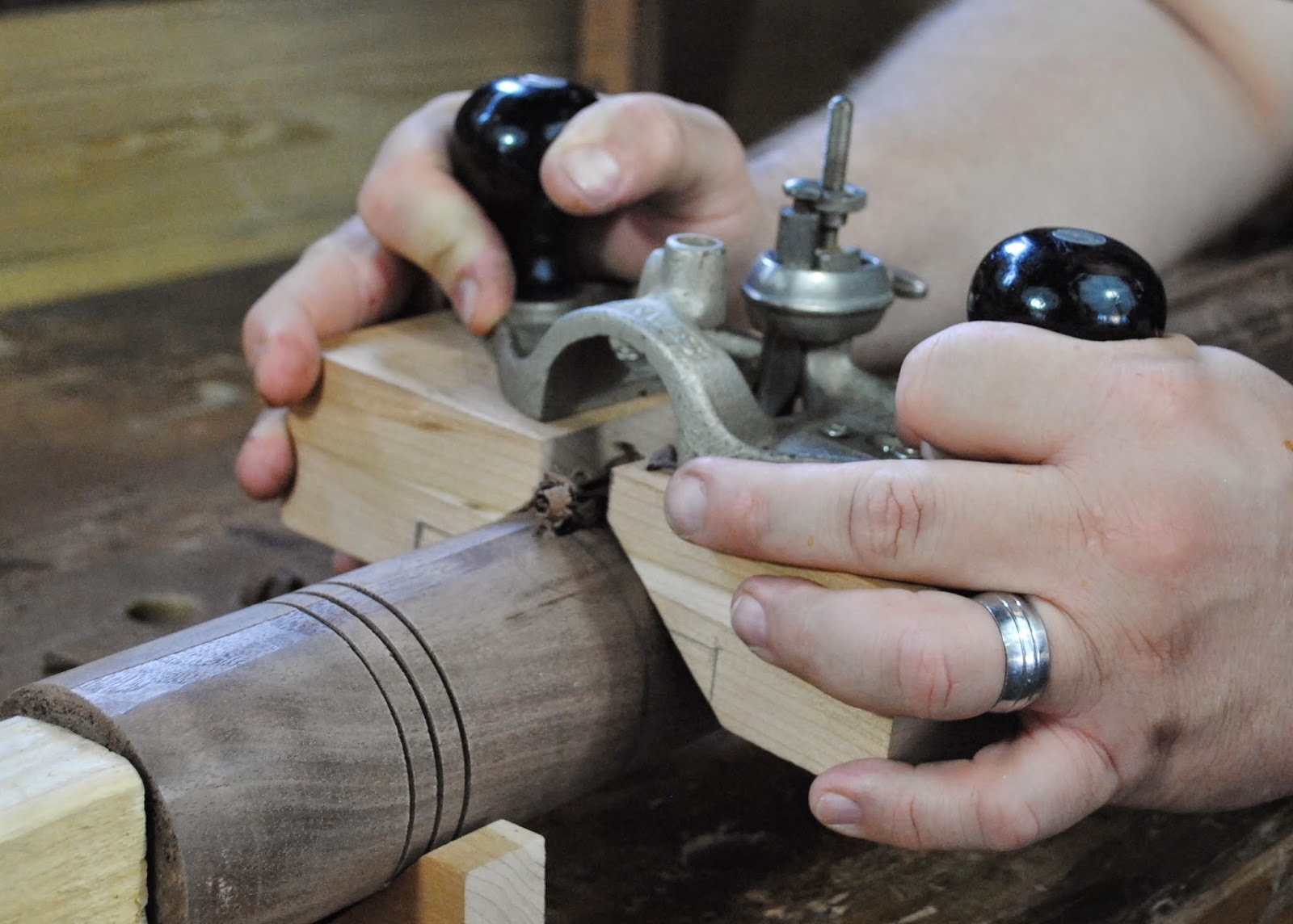 That hurdle is behind me, the next one, the finish, is still in my teeth.